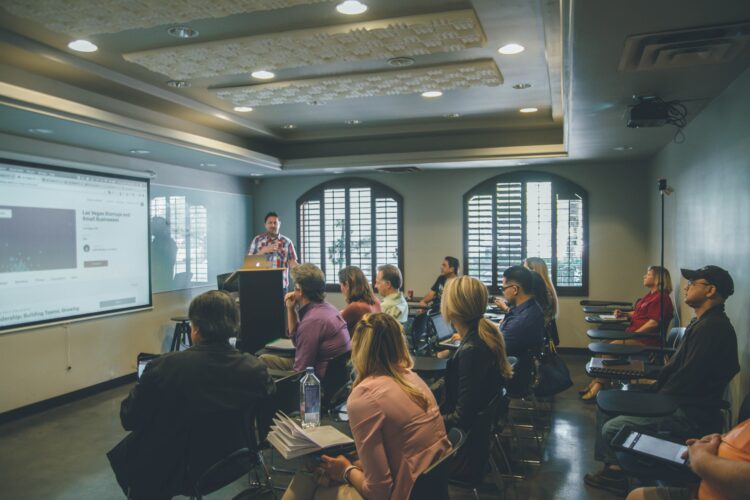 You hear this expression a lot.

What does the word ‘visual’ mean?  And the word ‘aid’?

Put the two together and we imply something visual, which helps our understanding.  We see something, analyse what we (think we) see and interpret what (we think) that means.  You could include words, as sighted people use their eyes to read, but the title ‘visual aids’ also implies images, symbols, diagrams, animation, video, body language, facial expression etc

And sometimes inventive presenters make beautiful visuals. But that takes time and effort and we can all admit that for every truly creative, visual, business presentation we’ve enjoyed, we’ve all sat through many that were the opposite.

Slides with words on

How do we react to a series of slides, containing sequence after sequence of written bullet points?  The most commonly used software package for this type of presentation, which includes easy to use templates, is PowerPoint.

The following advice on how to use PowerPoint, from Dave Paradi at  www.thinkoutsidetheslide.com  is typical:

“Observe the 6 by 6 Guideline”

How incredibly boring is that?  Are those slides ‘visual aids’? Can you imagine sitting in a conference and one person after another trots out a sequence of slides with 6 bullet points consisting of 6 words on each one?  Would you want to listen, or fall asleep?

He does add: “I would not consider this to be a strict rule, but it is a good guideline that will keep your slides clean and concise.“

But I’m not sure that helps much!

Edward Tufte, (described as ‘The Leonardo da Vinci of data’ by the New York Times), has this to say, in answer to a reader who questions his blistering attack on PowerPoint:

“Responsibility for poor presentations rests with the presenter.  But it is more complicated than that. PP has a distinctive, definite, well-enforced, and widely practiced cognitive style that is contrary to serious thinking.  PP actively facilitates the making of lightweight presentations.”

(Read the full text of his argument in his booklet ‘The Cognitive Style of PowerPoint’. www.edwardtufte.com )

One argument proffered in support of showing slides with writing on, is because they save the presenter time and act as an aid memoir.  So who are the slides really for?

Another argument is concerned with different learning styles, the argument being that some people need to see what is being said as well as hearing it.

If you show writing and speak at the same time you are simply splitting the audience’s focus.

Not one of us can read and listen properly simultaneously.  You as an audience member will choose one or the other and this applies to online presentations as well as live ones. In fact, you’ll probably do neither well as you are either being distracted or trying to move from listening to reading back to listening.

If you want people to read something on the screen then stop talking and give them time to do just that.  If you are describing something at all complicated at a live event, give them hand-outs at the end; or if the event is online, email it on to them or give them a link in the Chat. Just make sure it is written clearly so that they can study at their leisure, without being baffled by acronyms and so on.

Unfortunately, when people use slides online, they tend to stay with PowerPoint all the way through their presentation, which means they end up as a little oblong at the side of the screen. And they stay there. I have sympathy for them, because PowerPoint is not designed to dip in and out of and, if you do so, there are major glitches. However, it makes it extremely boring for your audience, especially if they get stuck on a slide of dull bullet points, for example.

If this is the case for you, try to find ways round it: spend time making your slides interesting visually – use infographics and so on – and try to come out of the slides and talk to your online audience when you can. You can always share individual slides without using PowerPoint.

Or send the slides in advance and ask your audience to view them on a separate tablet or laptop, or to print them out. That way you can keep your relationship with your audience and refer to the slides when you need to.

Beware of slides with rather meaningless statements, what I call ‘lowest common denominator’ thinking.  How easy is it to fit a true train on thought into a little rectangle on a screen?

“Many true statements at too long to fit on a PP slide, but this does not mean we should abbreviate the truth to make the words fit. It means we should find a better way to make presentations”

Let’s blame the inventors!  What do they make of Edward Tufte’s comments?

Bob Gaskins & Dennis Austin, who invented PowerPoint in the 1980s, in an article in the Wall Street Journal, 20th June 2007 :

“All the things Tufte says are absolutely true. People often make very bad use of PowerPoint.“

Mr. Gaskins reminds his questioner that a PowerPoint presentation was never supposed to be the entire proposal, just a quick summary of something longer and better thought out. He cites as an example his original business plan for the program: 53 densely argued pages long. The dozen or so slides that accompanied it were but the highlights.

Since then, he complains, “a lot of people in business have given up writing the documents. They just write the presentations, which are summaries without the detail, without the backup. A lot of people don’t like the intellectual rigor of actually doing the work.”

One of the problems, the men say, is that with PowerPoint now bundled with Office, vastly more people have access to the program than the relatively small group of salespeople for which is was intended.

So PowerPoint was invented for a ‘relatively small group salespeople’ to help them put together “a quick summary of something longer and better thought out.”

It was not intended to be the last word in all kinds of business presentations.